At the beginning of the meeting, Tünde Fűrész has presented the fields of activity of the institute, as well as the recent researches and analyzes that help to shape the Hungarian family policy. Vice President Balázs Molnár briefly introduced the Institute's international activities. He also emphasized that KINCS strives to make the results of Hungarian family policy more widely known abroad. 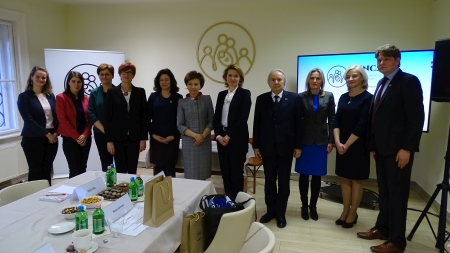 Minister Marlena Maląg stressed that since 2015, the government has doubled the budget allocated to family policy through targeted programs, currently spending 4% of GDP on this policy field. The Toddler + program is aimed at the development of crèche places for children under the age of 3, which has increased the capacity from 12% to 24% in a few years and is expected to reach 27% by the end of the year. Under the Good Start program, families receive an allowance of PLN 300 for each child at the beginning of the school year. Older people are targeted by the Pension + program, which includes a 13th month pension for all pensioners, the value of which is equal to the national minimum wage. The Senior + program provides clubhouses for retirees and in cooperation with NGOs, they offer activity programs for the elderly. Commissioner Barbara Socha said that they had been monitoring the results of Hungarian family policy and the activities of KINCS from the beginning, paying attention to which Hungarian good practices could possibly be implemented in Poland. This year's priority will be to develop a demographic strategy that will serve as a cross-sectoral basis for future action. The newly formed Council of Families, made up of civilians and scholars, is also involved in the development of the strategy. MEP Elzbieta Rafalska outlined the family processes within the European Parliament. She has said that although everyone sees the aging of Europe as an urgent issue, family policy is falling behind. She believes that Europe now focuses more on climate protection than on family protection.