Pro Familis Awards were handed over at the Budapest Demographic Summit

Family is the most natural form of society and politics must respect this by not dragging people out of this way of living together, said the Parliamentary Secretary of State of the Ministry of Human Capacities at the III. Budapest Demographic Summit on Friday, at the Pro Familis awarding ceremony. 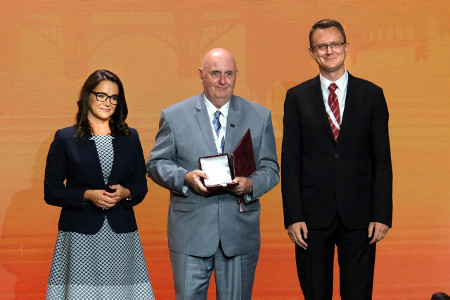 Bence Rétvári talked about how liberal and left-wing thinkers carry out a kind of "human experiment" by trying to break down the identity elements that define people: belonging to a nation, faith, being male and female, and family as the basis of society. However, this is not supported by Hungary and the conference participants, the Hungarian government and the speakers believe that the family and the child is the first and "although impulses from the world often confuse this belief, we have now been reassured that we are not alone" said the Secretary of State. He added that it is an autonomous decision of everyone how to organize their lives, but the state also had to vote for certain values, including family. However, the state itself is not enough to change people's way of thinking, and there is a need for civilians like the current awarded persons, Bence Rétvári emphasized.

The Secretary of State highlighted that not only the work, but also the life of the honoured people is exemplary, and their message is outstanding for the strengthening and happiness of Hungarian families.

Péter Farkas, former Head of Research at KINCS, has been awarded the Pro Familis Award for his outstanding decades of professional work in sociology and family policy.  Its educational and research activity in the area of support for families, the creation of a family-friendly social environment and family life education has greatly contributed to the worthy recognition of the value-generating activities of future generations.

Peter Farkas is the father of 4 children and the proud grandfather of 8 grandchildren.