Hungary believes that it is possible to grow on the basis of its own strength and become a rejuvenating nation - said the Minister of State for Family and Youth at the Ministry of Human Capacities at a conference entitled Shift towards a Family Friendly Europe on Monday. 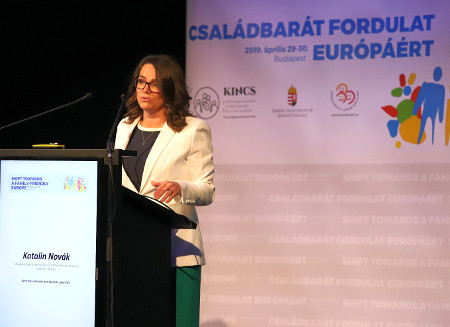 At the opening of the two-day conference, co-organised by the Maria Kopp Institute for Demography and Families and the Three Princes, Three Princesses Foundation, Katalin Novák said that it was an increasing problem that society is aging and young people are not having enough children or not having as much as they wish to have.
Hungary has been trying to respond to this problem with family support and family-friendly approaches in all areas of governance since 2010, as it believes that it is possible to gain strength and prosper from own power, highlighted the Minister of State. She said that Hungary is now spending twice as much on family support as in 2010, and is also the leader in its expenditure of 4.8 percents of the GDP.
Hungarian family policy is about being free to decide whether to have a family, if so, when to have one, how many children to have, whether to choose a full-time motherhood or paternity after childbearing or to return to their workplace, said Katalin Novák. She added that this was the reason that last year the number of childbirth and marriages is at the highest level for 20 years.
According to Katalin Novák - as a reference to migration-, Europe is facing a crossroads. For the demographic problems, Western Europe is looking for a solution providing only short-term success, along with catastrophic consequences on the long-term. Conversely, Hungary is thinking in the long term, choosing the harder route, but as a result of this choice, Europe can be an economically strong continent that becomes younger.
The Minister of State also highlighted that at the European Parliament elections on May 26, people can also decide which route Europe shall choose.

Kazimierz Kuberski, Deputy Minister of Family Affairs of Poland, began his lecture by mentioning that his country's government was setting up the same diagnosis as previously mentioned, and that they reagard as a primary objective to improve the demographic situation.
He highlighted the importance of helping families in this process. The Polish politician also believed that most of the families are planning a lot of children, but often when planning or having the first child, they encounter costs that discourage them from having further children.
This is why the Polish Cabinet is trying to encourage family formation in many ways, and has therefore introduced regular financial support for all children, and is therefore seeking to reduce poverty and provide many benefits to parents with three or more children.

Radka Maxová, a member of the Upper House of the Czech Parliament, referring to surveys in her country, said that the main factor in family formation is living standards and financial opportunities. The politician described it as a characteristic that women in their society have their first child at such late age that they often do not have time to give birth to more children.
She has stressed that the Czech government offers family support opportunities for all social strata and age group. As an example, Radka Maxová mentioned the new state-sponsored loan program to provide young people with access to housing.